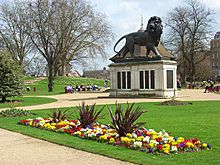 Forbury Gardens is a public park in the town of Reading in the English county of Berkshire. The park is on the site of the outer court of Reading Abbey. The site was formerly known as the Forbury. The current gardens is still known as The Forbury. Fairs were held on the site three times a year until the 19th century.

On 20 June 2020, three people were killed and three others seriously injured in a mass stabbing at the Forbury Gardens. The incident is being treated as a terrorist incident.

All content from Kiddle encyclopedia articles (including the article images and facts) can be freely used under Attribution-ShareAlike license, unless stated otherwise. Cite this article:
Forbury Gardens Facts for Kids. Kiddle Encyclopedia.