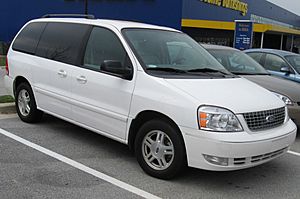 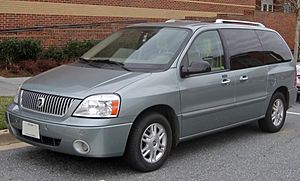 The Ford Freestar was a minivan produced by Ford Motor Company from 2004 through 2007. Ford claimed it was "all-new", but it was just a modern version of the Ford Windstar minivan. The name changed because Ford wanted to start every car name with the letter "F". (Other cars named like this were the Ford Five Hundred and Ford Fusion.)

The Freestar didn't sell too well because people were buying SUV's instead. This caused it to stop being produced. Ford made the Ford Flex in 2008 to replace the Freestar. The Flex had a new design which did not look like the Freestar any more.

All content from Kiddle encyclopedia articles (including the article images and facts) can be freely used under Attribution-ShareAlike license, unless stated otherwise. Cite this article:
Ford Freestar Facts for Kids. Kiddle Encyclopedia.