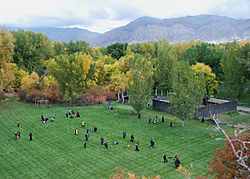 Fort Buenaventura, located in west Ogden, Utah, United States, was the first permanent Anglo settlement in the Great Basin. It was founded in 1846 just east of the Weber River, west of current downtown Ogden, Utah. The fort and the surrounding land were bought by the Mormon settlers in 1847 and renamed Brownsville (then later Ogden). The land on which the actual fort stood is now a Weber County park.

Fort Buenaventura was the first permanent settlement by people of European descent in the Great Basin. It was established by the trapper Miles Goodyear in 1846 about a mile west-southwest of the present-day Ogden municipal building. The fort was located east of the Weber River, at a bend in the river. The purpose of the fort was to serve as a trading post for trappers and travelers.

In November 1847, Fort Buenaventura and the surrounding land claim were purchased by the Mormon settlers for $1,950 (equivalent to about $44,446 in 2018). The settlement was then renamed Brownsville, but was later changed to Ogden after Peter Skene Ogden who trapped in the Weber Valley.

The site of the original Fort Buenaventura is a park occupying 84 acres (340,000 m2). When made a park, it was originally a Utah State Park, but is now a Weber County park. The fort has been reconstructed as accurately as possible using archaeological evidence and written accounts. The reconstruction was done using construction in use at the time of its original construction, mortise and tenon joints.

Located at 2450 "A" Avenue in Ogden, Utah, south of the Miles Goodyear Park. Fort Buenaventura Park is open from April to October. It offers camping, canoeing and meeting facilities.

All content from Kiddle encyclopedia articles (including the article images and facts) can be freely used under Attribution-ShareAlike license, unless stated otherwise. Cite this article:
Fort Buenaventura Facts for Kids. Kiddle Encyclopedia.