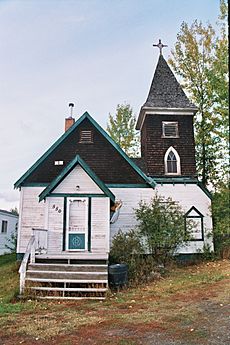 Fort Fraser is an unincorporated village of about 500 people, situated near the base of Fraser Mountain, close to the village municipality of Fraser Lake and the Nechako River. It can be found near the geographical centre of British Columbia, Canada, 44 km (27 mi) west of Vanderhoof on the Yellowhead Highway. Originally established in 1806 as a North West Company fur trading post by the explorer Simon Fraser, it is one of present-day British Columbia's oldest permanent European-founded settlements. The area around the community is also recorded as the site of the first land in British Columbia cultivated by non-First Nations people.

The original site of the fort is 4 km (2 mi) to the west, in Beaumont Provincial Park. In 1911, the fort was relocated to nearby Nadleh Village, and later closed in 1915. The present community is located at the site of the last spike of the Grand Trunk Pacific Railway, driven on April 7, 1914. Today, Fort Fraser is an active community sustained by both forestry and tourism.

The Fort Fraser Fall Fair is one of the oldest agricultural fairs in BC. The event has run annually since 1928, on the Labour Day weekend in September. 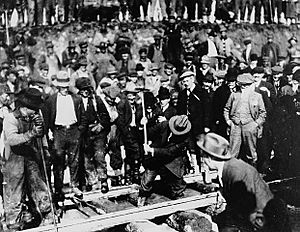 Driving of the last spike of the Grand Trunk Pacific Railway at Fort Fraser, April 7, 1914

Nearby communities of Fort Fraser include:

All content from Kiddle encyclopedia articles (including the article images and facts) can be freely used under Attribution-ShareAlike license, unless stated otherwise. Cite this article:
Fort Fraser, British Columbia Facts for Kids. Kiddle Encyclopedia.