Foxground is a locality in the Municipality of Kiama, in the Illawarra region of New South Wales, Australia. It is located two kilometres from the Princes Highway, 10 kilometres south west of Kiama. Broughton Creek flows through the valley.

The name Foxground is derived from the once abundant Grey-headed Flying Foxes. Foxground was originally known as "The Flying Foxes Camping Ground". The indigenous people of this area are from the Wadi Wadi and Yuin tribes. The first white men to explore the valley were likely to be Cedar cutters in the 1820s or possibly earlier. As early as 1814, cedar cutters explored the area around nearby Gerringong. In 1890 explosions were detonated in an attempt to remove the Flying Foxes.

After clearing of the rainforest, the area was used mostly for dairy farms. The first white settler was John Blow. His original house was built from split timber slabs, with a bark roof. However, as his circumstances improved, he built a new home, "Willow Glen" which still stands today.

An attractive rural valley; now without the shops, school, churches, or the combined milk depot/post office of the past. The school closed in 1950. The Church of England structure was built in 1873, and destroyed by fire in 1954. A Wesleyan church was built in 1861, and sold in 1901.

Photographer Jeff Carter moved onto a 45-hectare abandoned farm in the area with his Californian wife Mare in 1962 and together they set up a wildlife sanctuary which is documented in her book A Wild Life - Bringing up a Bush Menagerie. 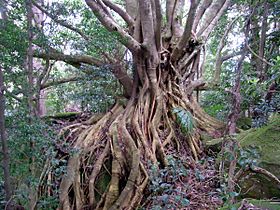 All content from Kiddle encyclopedia articles (including the article images and facts) can be freely used under Attribution-ShareAlike license, unless stated otherwise. Cite this article:
Foxground, New South Wales Facts for Kids. Kiddle Encyclopedia.