Francis Lookout is a heritage-listed cemetery at 157 Dewar Terrace, Corinda, Brisbane, Queensland, Australia. It was built from 1863 to 1966. It is also known as Francis Outlook. It was added to the Queensland Heritage Register on 7 September 2004.

Francis Lookout is an area of parkland located on a prominent hilltop site in Corinda. It contains burials from between 1862 and 1966. Arthur Morley Francis and his wife Angela were one of the first families to settle in the Corinda area bought 21 acres (8.5 ha), Portion 120, in 1862, which extended from the Brisbane River up to the present location of Francis Lookout. They also bought 33 acres (13 ha) which extended from Oxley Creek to the present Sherwood Road. Their surviving children were Richard Powell Francis Francis, Henry Alexander (Alex) Francis and Charlotte Elizabeth Francis. After the death of Richard in 1893 and Arthur in 1902, Angela, Alex and Charlotte returned to live permanently in West Hoathly, West Sussex, England. 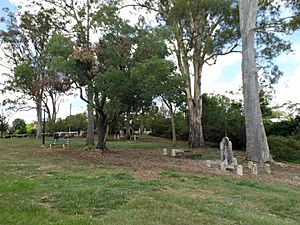 Their cemetery was dedicated when their youngest son, Clement, died in 1863. One acre was dedicated for this purpose as there was no municipal cemetery in the district. Arthur Francis was subsequently buried there as well as their son Richard (Dick) Francis, who died a hero after rescuing people in the 1893 Brisbane flood. The last of the family to be buried here was Mary Francis, Dick's wife, in 1937.

Other graves in the cemetery include: the Jones grave, the Dunlop grave, the Clarkson grave, the Walker grave, the Gray grave and two unlocated burials. 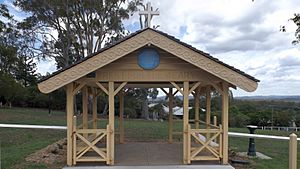 According to Alex Francis, his mother, Angela Francis, erected the lychgate for her husband Arthur Francis and the elaborate barge boards were carved by her friends. A small bronze plaque reads "ERECTED BY ANGELA FRANCIS 1902".

In 1930, the Brisbane City Council took direct control of thirteen of Brisbane's cemeteries. At this time Frances Lookout was under the control of living private trustees being Henry Alexander Francis and George Waugh. One of these, George Waugh approached the council with the request the council take over the cemetery, on the condition of the trustees waiving all claims to compensation and that the council would undertake to properly care for the cemetery in perpetuity. Contained in the conditions that the Trustees of the land presented to council was that interment rights after transfer remained for Mrs Mervyn Alban Jones. This option was never taken up my Mrs Jones. 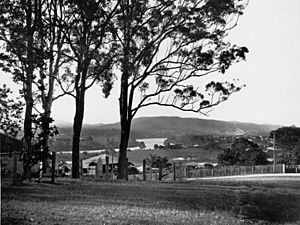 Panoramic view from Francis Lookout, across the Brisbane River towards Mt. Coot-tha, 1931

The parkland is called Francis Lookout and is located on the corner of Dewar Terrace and Hilda Street, Corinda. The park was previously used as a private cemetery and still contains several memorials. A timber lychgate was constructed in 1902.

The park is in a significant hilltop position with panoramic views of Brisbane, especially towards Mount Coot-tha. The site sits at 50 metres (160 ft) high, and is in the mid-range of Brisbane lookout heights.

The Lookout is a local landmark, being prominent in the urban landscape of the Corinda area as well as from the cross-river area of Fig Tree Pocket. The site is generally an open, grassed and reasonably level knoll, gently falling away to the northwest corner.

The collection of eucalypts is especially significant, as they represent a community type that is found exclusively on rock outcrops at higher altitudes. There is also a significant bunya pine, which appears to have been planted 40–60 years ago.

The site contains 10 known graves and one unlocated grave. The five Francis family graves are situated together and surrounded by a white painted fence. The other graves are located to the northern side of this and scattered in a seemingly random way.

The lychgate is a small timber structure supported on 100-by-100-millimetre (3.9 in × 3.9 in) posts with a gable roof covered by timber shingles. The floor of the structure is concrete.

Francis Lookout was listed on the Queensland Heritage Register on 7 September 2004 having satisfied the following criteria.

Francis Lookout is important in illustrating the pattern of Queensland's history, being rare surviving evidence of the mid and late 19th century development of the Corinda area as a farming community. In its strong association with the Francis family from 1862 and beyond, the place is also illustrative of the contributions made by individuals to the evolution of Queensland's history.

The place is a rare privately established burial ground in the Brisbane area, and has the potential to reveal further information about the settlement of the Corinda district, about 19th and early 20th century burial practices, and about the contingencies of pioneering life.

The place illustrates some of the principal characteristics of a small privately established burial ground, including a lack of denominational divisions and the locally connected interments - especially the graves of the family on whose land the ground was established, and of their neighbours. Its layout and funerary furniture are indicative of 19th century cemeteries.

The hilltop setting of Francis Outlook with its panoramic views of Brisbane and as an example of a well considered timber framed lychgate, Francis Outlook is important because of its aesthetic significance.

Burials in the Francis gravesite include:

Burials in the Gray gravesite include:

Burials in the Walker gravesite include:

The death of their daughter who died in 1866 was probably the reason the family grave was located in the Francis Cemetery. The graveyard in Sherwood only opened in 1871.

Burials in the Clarkson gravesite include:

The Clarkson family were neighbours of the Francis Family and lived across the Brisbane River in what is now known as the Lone Pine Koala Reserve. The death of their sons, only days apart in 1869 was probably the reason the family grave was located in the Francis Cemetery. The graveyard in Sherwood only opened in 1871.

Lone Pine is it was not named after 'Lone Pine' of Gallipoli fame, but after Queensland hoop pine. It was planted in 1868 by Mr. Daniel Clarkson the son of Mr. and Mrs. Joseph Clarkson

Burials in the Dunlop gravesite include:

Burials in the Jones gravesite include:

All content from Kiddle encyclopedia articles (including the article images and facts) can be freely used under Attribution-ShareAlike license, unless stated otherwise. Cite this article:
Francis Lookout Facts for Kids. Kiddle Encyclopedia.