Francis Pharcellus Church (February 22, 1839 – April 11, 1906) was an American publisher and editor. He was a member of the Century Association. 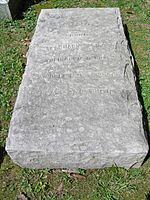 The monument of Francis Pharcellus Church in Sleepy Hollow Cemetery

He was born in Rochester, New York and graduated from Columbia College of Columbia University in New York City in 1859.

With his brother William Conant Church he established The Army and Navy Journal in 1863, and Galaxy magazine in 1866 (merged with Atlantic Monthly after 10 years). He was a lead editorial writer on his brother's newspaper, the New York Sun, and it was in that capacity that in 1897 he wrote his most famous editorial, "Yes, Virginia, there is a Santa Claus". In this editorial he responds to a young girl's question if there truly is a Santa Claus, writing that he definitely exists "as certainly as love and generosity and devotion exist". The editorial was uncharacteristic of Church's style – his other writings typically espoused hardened cynicism, skepticism toward religion and superstition, and a generally curmudgeonly approach – and Church initially refused to have his name attached to the piece.

Church was portrayed by Charles Bronson in a 1991 film based on the Virginia story. His character was voiced by Sidney Miller and by Alfred Molina in animated short films in 1974 and 2009 respectively.

All content from Kiddle encyclopedia articles (including the article images and facts) can be freely used under Attribution-ShareAlike license, unless stated otherwise. Cite this article:
Francis Pharcellus Church Facts for Kids. Kiddle Encyclopedia.