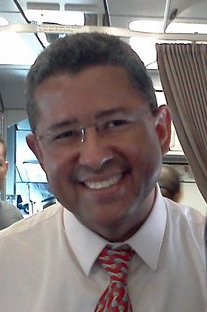 Francisco Guillermo Flores (October 17, 1959 – January 30, 2016) was a Salvadoran politician. He served as President of El Salvador serving from 1999 to 2004 as a member of the conservative Nationalist Republican Alliance (ARENA) replacing Armando Calderón Sol. He was born in Santa Ana, El Salvador. At the time of his death, Flores was being investigated for corruption charges.

Flores died on January 30, 2016, at the age of 56. He died in a hospital in San Salvador from a Cerebral hemorrhage after having surgery to treat it.

All content from Kiddle encyclopedia articles (including the article images and facts) can be freely used under Attribution-ShareAlike license, unless stated otherwise. Cite this article:
Francisco Flores Pérez Facts for Kids. Kiddle Encyclopedia.