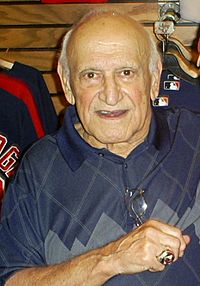 Frank James Malzone (February 28, 1930 – December 29, 2015) was an American baseball player. He was a former Major League Baseball third baseman and right-handed slugger who played for the Boston Red Sox (1955–65) and California Angels (1966). He was born in The Bronx, New York.

Malzone died in Needham, Massachusetts of natural causes at the age of 85.

All content from Kiddle encyclopedia articles (including the article images and facts) can be freely used under Attribution-ShareAlike license, unless stated otherwise. Cite this article:
Frank Malzone Facts for Kids. Kiddle Encyclopedia.