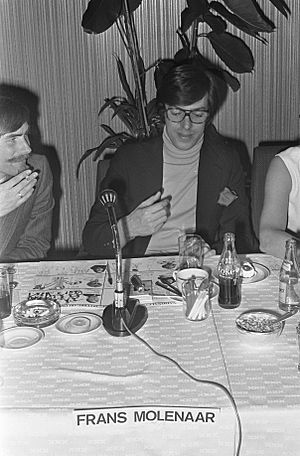 He studied to become a tailor in Amsterdam from 1955–1958. After his studies he did an internship with Charles Montaigne in Paris from 1959–1960 and worked for Gerard Pipart at Nina Ricci also in Paris from 1961–1964.

In 1967 he started his own business "Frans Molenaar Couture" and he worked as an haute couture designer since. He created the fashion award Frans Molenaar prijs in 1995.

Molenaar died from complications following from a fall at the age of 74 in Amsterdam.

All content from Kiddle encyclopedia articles (including the article images and facts) can be freely used under Attribution-ShareAlike license, unless stated otherwise. Cite this article:
Frans Molenaar Facts for Kids. Kiddle Encyclopedia.