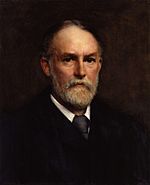 Frederic William Henry Myers (1843 – 1901) was a classical scholar, poet, philosopher, and past president of the Society for Psychical Research.

Frederic William Henry Myers was educated at Cheltenham College, and Trinity College, Cambridge where he received a B.A. in 1865.

In 1900 Myers was president of the Society for Psychical Research.

In 1903, after Myers death, Human Personality and Its Survival of Bodily Death was compiled and published. It was two large books at 1,360 pages in length, which presented an overview of Myers' research into the unconscious mind.

All content from Kiddle encyclopedia articles (including the article images and facts) can be freely used under Attribution-ShareAlike license, unless stated otherwise. Cite this article:
Frederic William Henry Myers Facts for Kids. Kiddle Encyclopedia.