In addition to the arena, the university is in the process of upgrading the athletics facilities, building new classroom space, dormitories, and other educational facilities on campus.

Sports teams and other events 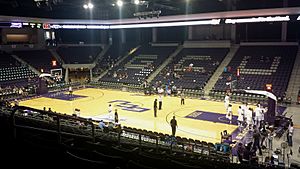 Inside of Grand Canyon University Arena, one hour prior to a men's basketball game.

Notable features include large windows providing natural light, ceiling beams signed by GCU employees and students, a vault of Bibles buried at center court and an outdoor balcony with views of the Camelback Road campus. There are only 42 steps from event level to concourse level to ensure that every seat in the arena is a good one.

Just over three years after opening, GCU Arena closed on March 3, 2014, to undergo a massive remodel. With the quicker than anticipated jump to Division I athletics for the Grand Canyon Antelopes athletic programs, the school announced the expansion of the arena from a capacity of 5,000 to 7,000 seats. The growth of the arena was primarily intended to incorporate adequate seating for the men's basketball games and for larger concerts.

Arizona sports icon Jerry Colangelo, who is closely connected with the athletic program, was involved in the expansion process, stating: "If GCU knew when the building went up just a couple of years ago that they would be in Division I as quickly as we have, it would have been built bigger."

After a proposed finish date of October 17, the Arena opened nearly six weeks ahead of schedule on August 23 for a Switchfoot concert as a part of the school's 2014 Welcome Weekend. Final changes included an upper-deck seating area, a movable track for the high definition video display, and a new basketball floor.

All content from Kiddle encyclopedia articles (including the article images and facts) can be freely used under Attribution-ShareAlike license, unless stated otherwise. Cite this article:
GCU Arena Facts for Kids. Kiddle Encyclopedia.