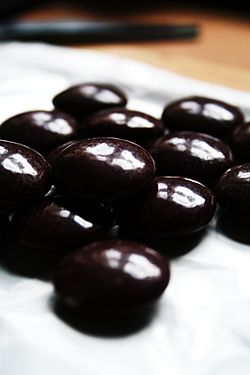 They originally had the slogan "They melt in your mouth, not in your hands", featuring in 1980s British advertisements, the same slogan used in the UK for Treets in the 1960s, and for M&M's in the UK and US up to the 1990s.

In line with Mars' re-branding, Minstrels were brought under the Galaxy brand and are now sold as "Galaxy Minstrels", referring to the use of Galaxy chocolate in them.

A new British advertising campaign in July 2008 was accompanied by a new slogan: "Sophisticated sharing". One of their advertisements featured two women, consuming Minstrels, ostensibly in an upmarket theatre, commenting knowledgeably on their seats and the theatre acoustics, only to be revealed as delighted viewers of a male strip act.

All content from Kiddle encyclopedia articles (including the article images and facts) can be freely used under Attribution-ShareAlike license, unless stated otherwise. Cite this article:
Galaxy Minstrels Facts for Kids. Kiddle Encyclopedia.