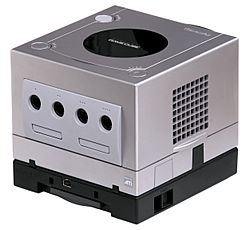 A Nintendo GameCube with the Game Boy Player (seen on the bottom of the console) attached.

The Game Boy Player is a device for the Nintendo GameCube console that allows a person to be able to play Game Boy, Game Boy Color, and Game Boy Advance video games on the console. It was released in Japan, North America, and Europe in June 2003 and discontinued in 2007.

All content from Kiddle encyclopedia articles (including the article images and facts) can be freely used under Attribution-ShareAlike license, unless stated otherwise. Cite this article:
Game Boy Player Facts for Kids. Kiddle Encyclopedia.