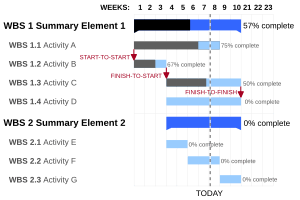 A Gantt chart is a type of bar chart. It is a tool of project management invented by the engineer Henry L. Gantt in the 1910s. The chart illustrates a project schedule.

They are now a common charting technique, but Gantt charts were thought revolutionary when first introduced. The charts are also used in information technology to represent data that has been collected.

All content from Kiddle encyclopedia articles (including the article images and facts) can be freely used under Attribution-ShareAlike license, unless stated otherwise. Cite this article:
Gantt chart Facts for Kids. Kiddle Encyclopedia.