Gardiners Creek, originally known as Kooyongkoot Creek, is a waterway in the eastern suburbs of Melbourne, and part of the Yarra River catchment.

In a few sparse locations remnant riparian bushland survives, however the majority of its length has been heavily urbanised, and the creek has been degraded in much the same way as other Melbourne eastern suburban waterways such as the Mullum Mullum Creek and Koonung Creek. The Gardiners Creek Trail follows the creek for most of its length. 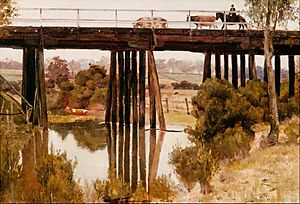 The creek's original name was Kooyongkoot, from the Woiwurrung language of the indigenous Australian Wurundjeri-Baluk group, which translates to 'haunt of the waterfowl'. The creek's current name was given in honour of early Melbourne land speculator and banker, John Gardiner, who settled near the junction of Kooyongkoot Creek and the Yarra River in 1836.

The creek originates in the suburb of Blackburn, where many small creeks and gullies converge around Blackburn Lake. It then flows southwest through Box Hill South, Burwood, and Ashwood. Approximately at its junction with Scotchmans Creek in Malvern East it turns northwest, then continues through Ashburton, Glen Iris, Malvern, and Kooyong, before finally flowing into the Yarra River in Hawthorn. 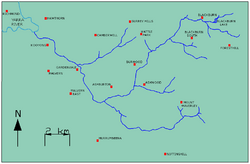 Map of Gardiners Creek and its tributaries

The Gardiners Creek Trail, a shared use cycling and pedestrian track, follows the general course of Gardiners Creek from Box Hill's boundary with Blackburn to the Yarra River, where a bridge over the river links it to the Main Yarra Trail.

The Monash Freeway/CityLink follow the Gardiners Creek valley from Malvern East to the Yarra River.

All content from Kiddle encyclopedia articles (including the article images and facts) can be freely used under Attribution-ShareAlike license, unless stated otherwise. Cite this article:
Gardiners Creek Facts for Kids. Kiddle Encyclopedia.