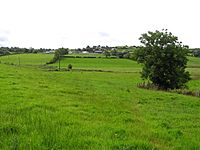 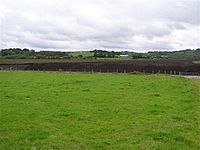 Garvaghullion is a townland in County Tyrone, Northern Ireland. It is situated in the barony of Omagh West and the civil parish of Longfield East and covers an area of 640 acres.

The name derives from the Irish: Garbhach an Chuilinn (rough place of the holly).

The townland contains one Scheduled Historic Monument: a Bronze Age wooden trackway (grid ref: H3680 7667). This was found in Garvaghullion Bog (grid ref: H365768), 9km north-west of Omagh, at a depth of over 1.5m in the bog. Garvaghullion Bog is a range of raised bogs found along the valley of the Fairy Water river in which commercial peat extraction had begun in the 1990s. By 1997 only one tenth of the original bog was left, which although scientifically important, hasn't been protected.

All content from Kiddle encyclopedia articles (including the article images and facts) can be freely used under Attribution-ShareAlike license, unless stated otherwise. Cite this article:
Garvaghullion Facts for Kids. Kiddle Encyclopedia.