Gatewood is a neighborhood in West Seattle, Seattle, Washington. Situated on the highest hill in Seattle it offers stunning views of Puget Sound, the Olympic Mountains, and downtown Seattle. It is generally bounded to the north and south by Raymond and Thistle Streets respectively, to the east by 35th Avenue, and the west by California Avenue and Fauntleroy Way. The neighborhood's landmarks include the Gatewood School, currently an elementary school. It is minutes from Lincoln Park. 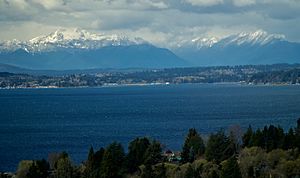 All content from Kiddle encyclopedia articles (including the article images and facts) can be freely used under Attribution-ShareAlike license, unless stated otherwise. Cite this article:
Gatewood, Seattle Facts for Kids. Kiddle Encyclopedia.