Genoplesium fimbriatum, commonly known as the fringed midge orchid is a small terrestrial orchid found from southern Queensland to southern New South Wales. It has a single thin leaf and up to thirty green to brownish-green flowers with red stripes and a red-tipped labellum with hairy edges. 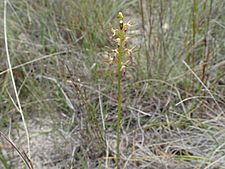 The fringed leek orchid was first formally described in 1810 by Robert Brown who gave it the name Prasophyllum fimbriatum and published the description in Prodromus Florae Novae Hollandiae et Insulae Van Diemen. In 1989, David Jones and Mark Clements changed the name to Genoplesium fimbriatum and in 2002 changed the name again to Corunastylis fimbriata but the latter change has not been accepted by the World Checklist of Selected Plant Families. The specific epithet (fimbriatum) is a Latin word meaning "fringed" or "fibrous".

Genoplesium fimbriatum grows in a range of habitats including open forest, heath and moss gardens. It is found in near-coastal areas and nearby tablelands between Stanthorpe and Vincentia. It often occurs in areas with frequent wildfires and a relatively high rainfall.

All content from Kiddle encyclopedia articles (including the article images and facts) can be freely used under Attribution-ShareAlike license, unless stated otherwise. Cite this article:
Genoplesium fimbriatum Facts for Kids. Kiddle Encyclopedia.