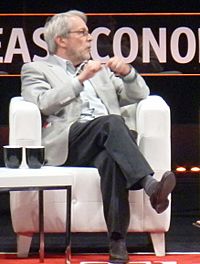 In 2001 he received the Linguistics, Language, and the Public Interest Award from the Linguistic Society of America for his works to National Public Radio's Fresh Air.

He published many popular press books including Going Nucular: Language, Politics and Culture in Controversial Times (2004).

Nunberg began working as a postdoctoral scholar at the University of California Berkeley and visiting professor at Stanford University. In the mid-1980s he moved to the Xerox Palo Alto Research Center where he worked until 2001.

Nunberg died August 11, 2020 from glioblastoma at his home in San Francisco at the age of 75.

All content from Kiddle encyclopedia articles (including the article images and facts) can be freely used under Attribution-ShareAlike license, unless stated otherwise. Cite this article:
Geoffrey Nunberg Facts for Kids. Kiddle Encyclopedia.