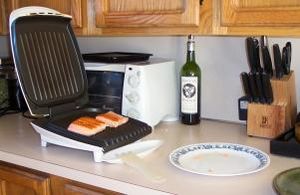 The George Foreman Lean Mean Fat-Reducing Grilling Machine, commonly known as the George Foreman Grill, is an indoor, electrically-heated grill manufactured by Salton, Inc. George Foreman, a former champion boxer, is the main spokesperson for the grill. Since its introduction in 1994, over 80 million Foreman grills have been sold.

Foreman has made over 150 million dollars from the sales of his grills, an amount that is more than he earned as a boxer.

The company has created many different sizes and designs for the grill since it was first made. These include "The Champ" which was the first grill produced, a family size grill, and a "Super Large" grill that has 144 inches of grilling space. There is also a deep fryer and roaster.

All content from Kiddle encyclopedia articles (including the article images and facts) can be freely used under Attribution-ShareAlike license, unless stated otherwise. Cite this article:
George Foreman Grill Facts for Kids. Kiddle Encyclopedia.