George Rainsford Fairbanks (1820–1906) was a lawyer, Clerk of the Circuit Court, Florida State Senator, president of Florida Fruit Growers Association and the Florida Fruit Exchange; editor of the Florida Mirror; the author of books on Florida history; and the founder and president of Florida Historical Society. He lived in Fernandina Beach. He is listed as a Great Floridian. 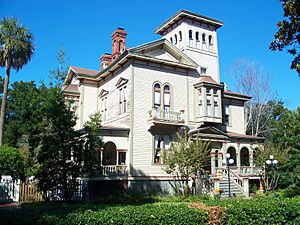 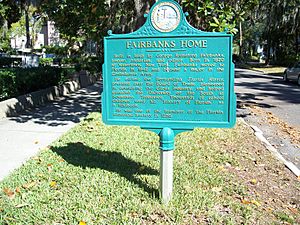 Historical marker at the Fairbanks House

Senator David Yulee brought Fairbanks, a Confederate Major during the U.S. Civil War, to Fernandina in 1879 to run the town's Florida Mirror newspaper. Fairbanks was also a historian, an educator, a former state senator, and one of the founders of the University of the South in Sewanee, Tennessee. He and his granddaughter witnessed the fire that destroyed downtown Jacksonville 40 miles away from the house he built in 1885.

The Fairbanks House was converted into a bed & breakfast and is on Amelia Island's Fernandina Beach at 227 South Seventh Street. It was listed on the National Register of Historic Places in 1973.

All content from Kiddle encyclopedia articles (including the article images and facts) can be freely used under Attribution-ShareAlike license, unless stated otherwise. Cite this article:
George Rainsford Fairbanks Facts for Kids. Kiddle Encyclopedia.