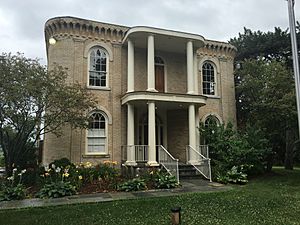 The George Stickney House or simply Stickney House or Stickney Mansion is located in rural McHenry County, Illinois, in the small village of Bull Valley. The Stickney House is currently the Bull Valley Police Headquarters since 1985. The structure has been listed on the National Register of Historic Places since 1979. The house is widely considered bizarre due to its design, which was based, in part, on George and Sylvia Stickney's belief in Spiritualism.

George and Sylvia Stickney built this English country house in 1865. They chose such an isolated place for the peace and quiet and for their spiritualistic activities. Both of them were said to be accomplished mediums and they wanted to host parties and seances for their friends. The seclusion offered by the Illinois countryside made the perfect setting. The Stickneys may have drifted toward spiritualism as a way to communicate with their dead children; they had ten children but only three survived to adulthood. It is known that the family conducted seances on the second floor of the building, in Sylvia's ballroom. In the years since the house left the hands of the Stickney family, owners have reported supernatural occurrences.

The house itself was very unusual in its design. It has two stories, although the second floor was reserved for a ballroom that ran the entire length of the building. The house is actually very big for being built in the 1800s. Upstairs has two rooms, one with a bathroom, and down the hall is Sylvia's ballroom that has three more rooms connecting to it. During the Civil War, the house also served as quarters for Federal soldiers and was home to the first piano in McHenry County. This was not why the house gained its fame though! The Stickneys insisted on adding distinctive features into the design of the house. These features, they assured the architect, would assist them when holding seances and gatherings at the property. They believed that spirits have a tendency to get stuck in 90 degree corners. It has also been suggested that the Stickneys believed that corners attracted the attention of evil spirits as well, a common belief in Spiritualist circles of the time. Therefore, the home's interior was designed with no 90 degree angles between the walls. Rumor has it that there is one 90 degree angle in the house, and this is also where George Stickney died. Not true, Richard confirmed that the house was searched and documented and there was no 90 degree angles found at the time of George's death. He also confirmed that George's death was never documented, so no one knows how he died.

Today the mansion is occupied by the Village of Bull Valley and its police department.

In 2005 Bull Valley Police Chief Norbert Sauers described his experiences with possible paranormal events in the Stickney Mansion. Sauers said that village employees have heard numerous sounds that seem to defy explanation. He described hearing footsteps in the second floor ballroom, a room that today is used only as storage for village records but was used for seances when the Stickneys owned the mansion. The footstep sounds have extended out onto the stairwell at times. Other occurrences include hearing human sounding noises or voices. They sometimes even hear the toilets flushing when they are alone in the house.

The Chief said he has also personally experienced objects moving around on his desk, lights turning off and, door knobs turning and a door opening, seemingly by themselves, and voices from thin air, having once heard a shout in his ear when no one was around him. Another police officer in Bull Valley claims to have come face to face with an apparition of Stickney's father-in-law. 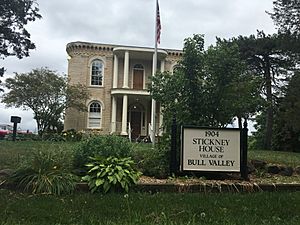 All content from Kiddle encyclopedia articles (including the article images and facts) can be freely used under Attribution-ShareAlike license, unless stated otherwise. Cite this article:
George Stickney House Facts for Kids. Kiddle Encyclopedia.