Bull Valley is a village in McHenry County, Illinois, United States. The population was 1,077 at the 2010 census. Surrounded by the suburban sprawl of Crystal Lake, Woodstock, and McHenry, the village prides itself in its rural, low-density character. 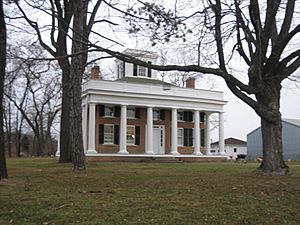 The Terwilliger House in Bull Valley.

McHenry County has gently rolling, glaciated terrain. Some of the County's larger hills border the rural area of East Central McHenry County between Crystal Lake, McHenry, and Woodstock. This area has long been called "Bull Valley." McHenry County was one of the fastest-growing counties in the U.S. each decade from 1920 to 2000.

In 1942, a group of neighbors organized the Countryside Improvement Association. It gradually became involved in questions of land use, and in 1955, in an unprecedented action, owners of about 3,000 acres, half of the Bull Valley area at the time, voluntarily put their land into 3-acre zoning, the highest residential classification then offered by the County. This single decision would establish the future character of the community.

In 1960, money was raised from residents by subscription, to pay for a land use study and professional planning advice. The Eastern McHenry County Plan Association (EMCPA) was then formed to address the common problems of four townships. That Association’s recommendation in a report of July 25, 1961 was that a large part of the Bull Valley area be zoned for a residential/estate use of a minimum of 5-acre tracts. Unlike the traditional concept of a community where the most intense use is at the center of the area and becomes more open as the distance from the center increases, the EMCPA area has at its center, a very attractive rolling, wooded area currently developed in low density, open estate type residential and farm development (and) included in this center portion are two very broad, scenic valleys which should be retained for non-intensive development.” When McHenry County established a Planning Commission in 1963, the EMCPA dissolved and turned its studies over to the County Planning Commission.

As the County began to consider land use policy, Bull Valley residents continued to oppose development that threatened the farms, forested hills, and wetlands. Through their association, they bore the costs of legal representation at numerous zoning hearings, until it became obvious that private efforts could not win the fight to save the rural character of the land.

In 1977, the Countryside Improvement Association was reorganized as the Bull Valley Association, which initiated and campaigned for a referendum on incorporation. The referendum passed at an election held on July 23, 1977, giving residents for the first time, the authority to implement their long-standing purposes. Because state law required that a new municipality could have no fewer than 200 voters in an area of two square miles, the Village had to reach out for scattered households, hence its peculiar shape and boundaries.

In the early years of the village, there was nearly no government infrastructure. Later, a small tax was assessed to provide for simple road repairs. By the 1980s, the village had hired a police officer part-time who shared time with the neighboring village of Prairie Grove. 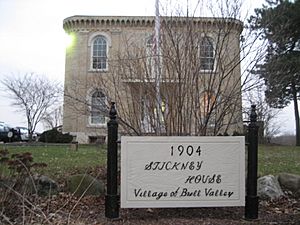 Today the Village government occupies Stickney House, one of the oldest brick buildings in the area. This house was originally built without any corners due to the belief of the Stickneys that evil spirits could live in corners. While the village has grown, and even includes some subdivisions now, it remains rural, with areas of woods, farms, and low-density housing between the urban sprawl of Crystal Lake and McHenry. There is still no retail business in the village nor electric street lamps.

There were 268 households, of which 28.7% had children under the age of 18 living with them, 76.9% were married couples living together, 3.4% had a female householder with no husband present, and 19.0% were non-families. 15.3% of all households were made up of individuals, and 8.6% had someone living alone who was 65 years of age or older. The average household size was 2.71 and the average family size was 3.04.

All content from Kiddle encyclopedia articles (including the article images and facts) can be freely used under Attribution-ShareAlike license, unless stated otherwise. Cite this article:
Bull Valley, Illinois Facts for Kids. Kiddle Encyclopedia.