McHenry is a city in McHenry County, Illinois, United States. It is a suburb, part of the Chicago metropolitan area and is located about 45 miles northwest of Chicago. The population was 27,135 at the 2020 census. McHenry was at one time the county seat of McHenry County, which once included adjoining Lake County to the east. McHenry took its name from the county, which was named for Major William McHenry, a prominent US Army officer in the Black Hawk War.

It rests at an elevation of 797 feet and the Fox River flows through the eastern portion of the city. It is surrounded by natural lakes and streams, grassy moraine hills, gravel banks and shallow nutrient-rich peat bogs, remnants of receding glaciers from the last ice age. Moraine Hills State Park and Volo Bog State Natural Area preserve some of these natural features.

There were 7,872 households, of which 38.7% had children under the age of 18 living with them, 57.2% were married couples living together, 9.7% had a female householder with no husband present, and 29.4% were non-families. 24.7% of all households were made up of individuals, and 9.9% had someone living alone who was 65 years of age or older. The average household size was 2.70 and the average family size was 3.25.

The closest private airport to the city is Galt Airport in Wonderlake.

The city of McHenry is served by Pace Bus and connects travellers to other cities in the area.

The Prairie Trail runs through the middle of McHenry from Crystal Lake and connects to trails near the border of Wisconsin. 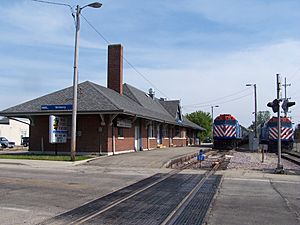 McHenry is currently the terminus of a branch line on Metra's Union Pacific Northwest Line, with weekday passenger service to Ogilvie Transportation Center (formerly Northwestern Station) in downtown Chicago. The line that now terminates at McHenry once continued to Williams Bay, Wisconsin, but that service was discontinued in stages in the 1960s and 1970s.

Illinois Route 31 and Illinois Route 120 intersect in the city center. While not highways or interstates, they are the main roads into and out of the city.

Downtown McHenry is home to the one mile (1.6 km) McHenry Riverwalk District which runs along Boone Creek and the Fox River. It is home to residences, shops, a movie theater, restaurants, bars and other various forms of entertainment and commerce. It is broken up into three zones, the "Historic Zone", "Residential Zone (Phase 1)" and "Commercial Zone".

McHenry is served by one public library which is part of Cooperative Computer Services (CCS) consortium. The library itself houses physical books, DVDs, magazines, and more as well as providing access to online digital content. The library also offers various training classes on various topics and has several meeting rooms available for use by request.

All content from Kiddle encyclopedia articles (including the article images and facts) can be freely used under Attribution-ShareAlike license, unless stated otherwise. Cite this article:
McHenry, Illinois Facts for Kids. Kiddle Encyclopedia.