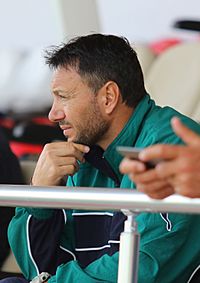 Georgi Markov (Bulgarian: Георги Марков; 20 January 1972 – 18 February 2018) was a Bulgarian footballer. He played as a defender. He was known as a tough, but generally fair tackler, and was nicknamed the "Börner Grater". He was born in Gotse Delchev, Bulgaria. He played for the national football team of Bulgaria from 1999 to 2005.

All content from Kiddle encyclopedia articles (including the article images and facts) can be freely used under Attribution-ShareAlike license, unless stated otherwise. Cite this article:
Georgi Markov (footballer) Facts for Kids. Kiddle Encyclopedia.