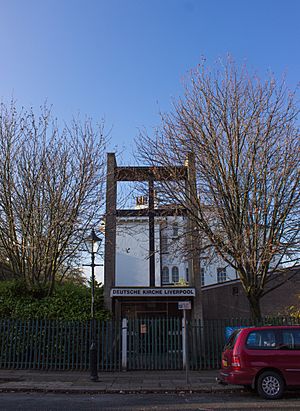 The German Church (German: Deutsche Kirche) in Liverpool is in Bedford Street South/ Canning Street and is part of the German speaking churches of North England.

The North of England German Protestant churches are members of the "Synod of German-speaking Lutheran, Reformed and United Congregations in Great Britain" and come under the care of the overseas department of the EKD (Evangelical Church in Germany). Services in German are held twice a month on the first (4:00 pm) and third Sundays (11:00 am).

This is the origin of the German Evangelical Lutheran (E.K.D.) congregation in Liverpool. After using many different buildings for worship and education, it built its own structure in 1960.

All content from Kiddle encyclopedia articles (including the article images and facts) can be freely used under Attribution-ShareAlike license, unless stated otherwise. Cite this article:
German Church, Liverpool Facts for Kids. Kiddle Encyclopedia.