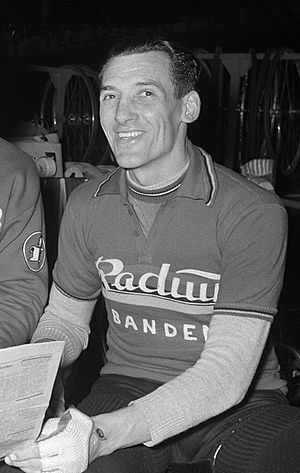 Gerardus "Gerrit" Petrus Voorting (18 January 1923 – 30 January 2015) was a racing cyclist from the Netherlands. He was born in Velsen. He was active between 1947 and 1960. He won the silver medal in the individual road race at the 1948 Summer Olympics in London, United Kingdom. He died in Heemskerk.

He was the elder brother of Olympic cyclist Adrie Voorting.

All content from Kiddle encyclopedia articles (including the article images and facts) can be freely used under Attribution-ShareAlike license, unless stated otherwise. Cite this article:
Gerrit Voorting Facts for Kids. Kiddle Encyclopedia.