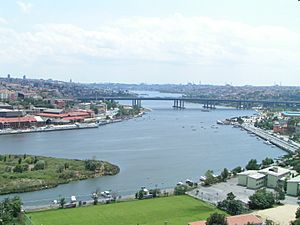 Getica (original title: De origine actibusque Getarum, about the origins and deeds of the Getae (the Goths)) is the main work of Jordanes. It was written in 551. He made a summary of a larger work by Cassiodoriius called Libri XII De Rebus Gestis Gothorum (Twelve books about the things the Goths did, commonly known as Libri XII). As the Libri XII have not survived, his work is the only surviving account that was written when there were still Goths.

According to the Getica, the Goths immigrated form Scandinavia and settled around what is the city Danzig today. This has been identified with the Wielbark culture.

All content from Kiddle encyclopedia articles (including the article images and facts) can be freely used under Attribution-ShareAlike license, unless stated otherwise. Cite this article:
Getica Facts for Kids. Kiddle Encyclopedia.