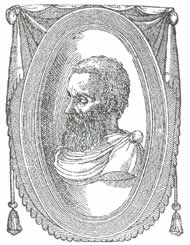 Giovanni Francesco "Gianfrancesco" Straparola (c. 1480 – c. 1557) was a writer from Caravaggio, Italy. His principal work is Le piacevoli notti, a collection of 75 stories. Modelled on Decamerone, it has participants of a 13-night party in the island of Murano, near Venice, tell each other stories that vary from the bawdy to the fantastic.

Among the tales are:

All content from Kiddle encyclopedia articles (including the article images and facts) can be freely used under Attribution-ShareAlike license, unless stated otherwise. Cite this article:
Gianfrancesco Straparola Facts for Kids. Kiddle Encyclopedia.