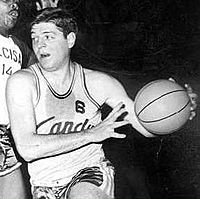 Gianfranco "Franco" Lombardi (20 March 1941 – 22 January 2021) was an Italian professional basketball player and coach. During his playing career, his nickname was "Dado". He was born in Livorno, Italy. He played for the national team. He participated in the 1960, 1964 and 1968 Summer Olympics.

In 2006, he was honored into the Italian Basketball Hall of Fame.

All content from Kiddle encyclopedia articles (including the article images and facts) can be freely used under Attribution-ShareAlike license, unless stated otherwise. Cite this article:
Gianfranco Lombardi Facts for Kids. Kiddle Encyclopedia.