Giulia Grisi (22 May 1811 – 29 November 1869) was an Italian opera singer. She performed widely in Europe, the United States and South America and is widely considered to be one of the leading sopranos of the 19th century.

Her second husband was Giovanni Matteo Mario de Candia (also known as "Mario the Tenor"), scion of a noble family of the Kingdom of Sardinia. She is buried at Père Lachaise Cemetery in Paris. Her grave is marked "Juliette de Candia", styled in her married last name. 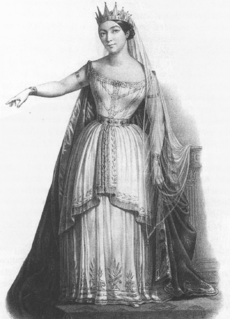 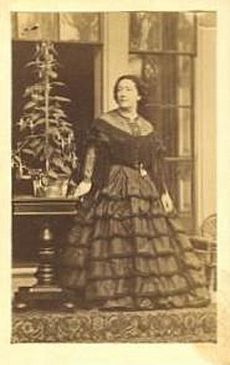 Born in Milan, Giulia Grisi was the daughter of Gaetano Grisi, one of Napoleon's Italian officers, and Giovanna née Grassini. She came from a musically gifted family, her maternal aunt Giuseppina Grassini (1773–1850) being a favourite opera singer both on the continent and in London. Her older sister, Giuditta and her cousin Carlotta were both artistes, the former as a singer and the latter as a ballet dancer. Giuditta was the creator of the breeches role of Romeo in Bellini's I Capuleti e i Montecchi.

Grisi was trained for a musical career, making her stage debut as Emma in Rossini's Zelmira in Bologna in 1828.

Rossini and Bellini both took an interest in her, she was the first to play the part of Adalgisa in Bellini's Norma in Milan, in which the dramatic soprano Giuditta Pasta took the title role. Grisi appeared in Paris in 1832 in the title role of Semiramide in Rossini's opera and was a great success; in 1834 she made her debut in London as Ninetta in La gazza ladra; and, again in Paris, in 1835 she created the role of Elvira in the premiere of Bellini's final opera, I puritani at the Théâtre-Italien. In 1842, Donizetti wrote the parts of Norina and Ernesto in Don Pasquale for Grisi and Giovanni Matteo de Candia, usually known by his stage-name of Mario, who was to become the love of her life.

Her voice was described as a dramatic soprano which, during her prime, was praised by music critics for its exceptional beauty, evenness and smoothness. Her career spanned 30 years in total. She was a noted actress, appearing regularly in London with such eminent singers as Luigi Lablache, Giovanni Battista Rubini and Antonio Tamburini, not to mention her husband, Mario. Indeed, the prickly press commentator Henry Chorley praised both her and Mario for their success in establishing Italian opera as an important component of the London music scene.

In 1854, after they were married, Giulia and Mario undertook a lucrative tour of the United States of America, where they were treated as major international celebrities.

Since Lord Castlereagh had no legitimate children by his wife, George Frederick was first brought up by his natural father under the understanding of guardianship or god-father figure, while Grisi continued her singing career, since this son was never legally recognized as a Stewart they granted him a blessed last-name Ormsby "by the willow-tree in Welsh". After Grisi and Lord Castlereagh's relationship ended, he was encharged of paying his education at an English boarding-school and brought their son as an uncle figure to see her whenever she was in London.

Whilst living with "Mario" Giovanni de Candia before their marriage, Giulia and Mario kept homes in Paris and London. After a tumultuous legal battle, Grisi obtained her divorce.

They frequently returned to Italy, living seasonally at the Villa Salviati in Florence, a property Mario had purchased in 1849. Grisi wrote in her diary of the exciting times spent there with distinguished guests drawn from the world of opera and the aristocracy. But she rather preferred their private family vacations at their cottage in Bordighera the place where she felt at home. 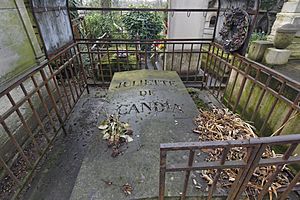 During a trip to Saint Petersburg, Russia, while traveling by train with her family, Grisi was involved in an accident after having crossed the border into Germany. She was taken to a hotel in Berlin, where she spent her last days under the care of a Dr. Isabell. She died there on 29 November 1869, aged 58. Her husband took her body to Paris, where she was buried at Père Lachaise Cemetery. Her tomb is marked with a plain white stone with the inscription "Juliette de Candia".

Her incredibly rich operatic career was compiled in musical records, pictures, and, paintings. Upon her death, her husband donated a large amount for the creation of Sopranos' scholarships at the Paris Opera, the theater that first gave fame to Guiglia's voice.
One of her daughters with Mario, Cecilia Maria de Candia, became a recognized writer and married an English gentleman, Godfrey Pearse, and in 1910 published the book The Romance of a Great Singer – A Memoir of Mario.

All content from Kiddle encyclopedia articles (including the article images and facts) can be freely used under Attribution-ShareAlike license, unless stated otherwise. Cite this article:
Giulia Grisi Facts for Kids. Kiddle Encyclopedia.