The Glenamoy River (Irish:Abhainn Ghleann na Muaidhe) is a river in north County Mayo, in the northwest of Ireland. It is renowned for its stocks of sea trout and salmon.

The Glenamoy River rises from its source at Glencalry and Barroosky. It flows for 23 kilometres (14 mi). For the greater part of its length it flows westwardly, through Glenamoy, heading for the village of Gortacragher, where it meets the Muingnabo River at Sruwaddacon Bay. The estuary is five miles (8.4 kilometres) long. The catchment area of the Glenamoy River is 14 km2. The Glenamoy River has an elevation of 8 metres. It is particularly susceptible to fluvial flooding, in flood times, the river often becomes a roaring torrent sweeping away people and cattle. This river gets a good run of grilse and seatrout from July to September but because it is classed as a late river, fishing continues here up to early October. There are numerous fishing pools on the river, namely:

The geology of this catchment is mainly schist, with the primary land use being peatland with pockets of forestry and agriculture. This catchment falls within two special areas of conservation (SAC's), the Slieve Fyagh Bog SAC to the south and Glenamoy Bog Complex SAC to the north and west. Nine sites were surveyed on the Glenamoy River Catchment between the 26th and 27 July 2017 by Inland Fisheries Ireland.

'Sunday night was a night of terror for the people of Erris, County Mayo, where crops were destroyed and bridges swept away by the heavy rains. Several people were forced to flee from their homes near Glencastle. Rain fell in a deluge from mid-day until midnight in Erris, and crops along the swollen rivers were ruined, Glenamoy bridge was swept away, dislocating traffic between Belmullet and Ballycastle.' (The Irish Times, August 29th 1933).

Near to the Glenamoy river lied the Annie Brady's Bridge. In 1841 a road running from Glenamoy to Carrowteige was approved and eventually completed in 1846, but no bridge was erected over the Muingnabo River. People could ford the river using an unsafe paving. During the Great Famine and following years, this river ford became the parting point between the emigrants and their families; scenes of lamentation and sadness were witnessed here. 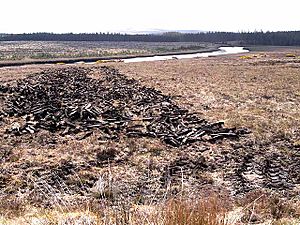 The Glenamoy River a short way above where it enters the estuary of Sruwaddacon Bay. Photo © Oliver Dixon (cc-by-sa/2.0)

Annie Brady was the wife of the Inspector of Fisheries for the area. She had a great love for the scenery of the district and saw those sad scenes. She decided to raised money to build a bridge at the site to help people to travel further with their loved ones and safer. The bridge was built in 1886 and swept away by a great flood in 1933. It was then replaced by a new structure still there today.

There is a fishing club, The Glenamoy Community Angling Association, which issues permits for angling on the river, which was set up in 1999. The river passes through the villages of Glencalry, Glenamoy, Spadow, and Gortacragher. Recently, there has been an addition of a wheelchair friendly pool in the fishery.

All content from Kiddle encyclopedia articles (including the article images and facts) can be freely used under Attribution-ShareAlike license, unless stated otherwise. Cite this article:
Glenamoy River Facts for Kids. Kiddle Encyclopedia.