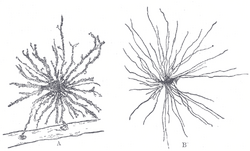 Neuroglia of the brain shown by Golgi's method 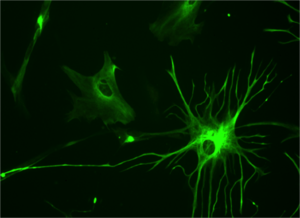 Glia are thought to have four main functions:

Glia may have more functions than just these four.

A type of glial cell are thought to play a role in Amyotrophic Lateral Sclerosis (ALS or Motor Neurone Disease), Alzheimer's disease (a type of dementia) and Parkinson's disease. The microglia are the macrophages of the nervous system. In these neurodegenerative disorders, it's thought that the microglia digest healthy brain cells, causing the degeneration of brain function. This is especially true for Parkinson's disease, where the Glia break down dopaminergic cells, causing the symptoms associated with Parkinson's.

All content from Kiddle encyclopedia articles (including the article images and facts) can be freely used under Attribution-ShareAlike license, unless stated otherwise. Cite this article:
Glial cell Facts for Kids. Kiddle Encyclopedia.