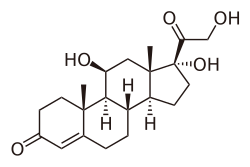 GCs are part of the feedback system for the immune system. They do things like reducing inflammation. They stimulate the creation of glucose from non-carbohydrate carbons, such as proteins.

They are important in foetal development, promoting the maturing of the lungs, and are essential for brain development.

Glucocorticoids bind to the glucocorticoid receptor on cells. The newly formed complex moves into the cell nucleus, where it binds to a region on the target genes. This regulates gene expression. This process is referred to as transcriptional activation, or transactivation.

The proteins encoded by these up-regulated genes have a wide range of effects, including, for example:

A variety of synthetic glucocortisoids have been developed for medical use. In addition to the above two purposes, glucocorticoids play important roles in foetal development, and body fluid homeostasis.

All content from Kiddle encyclopedia articles (including the article images and facts) can be freely used under Attribution-ShareAlike license, unless stated otherwise. Cite this article:
Glucocorticoid Facts for Kids. Kiddle Encyclopedia.