Glyndon, Maryland is an unincorporated community in Baltimore County, Maryland, United States. Founded in 1871 by Dr. Charles A. Leas, the village is located in the northwest section of Baltimore County and is primarily a residential suburb of metropolitan Baltimore City. The village is characterized by the predominance of historic Victorian homes and a strong sense of community among its residents. Glyndon is listed on the National Register of Historic Places (1973) and on the Maryland Inventory of Historic Properties (1973); the Glyndon Historic District was also designated as the first historic district in Baltimore County (1981). 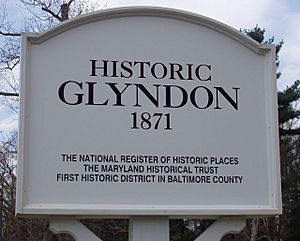 Also listed on the National Register of Historic Places is the Worthington Valley Historic District.

Glyndon still maintains much of the charm it had as a Victorian summer village over 100 years ago. The arrival of the Western Maryland Rail Road in 1860 promoted the early location and growth of Glyndon. The area itself was beautiful with green expanses and tall trees; an elevation above sea level of almost 700 feet provided delightful summers and mild winters.

Prior to 1871, Dr. Charles A. Leas, the first health officer of Baltimore City and a former American consul, made several purchases of land in what is now Glyndon. When he discovered that farming was not his metier, he decided to found a small town. He employed the Baltimore surveyor Augustus Bouldin to lay out the lots and streets, planting rows of maples along the avenues. Baltimore County businessman Samuel P. Townsend also promoted the growth of the town with his purchase and development of a substantial number of acres. He assumed an active role in the community as a merchant, a railroad agent, and a postmaster.

Affluent Baltimorians acquired summer homes in early Glyndon to escape the heat of the city. The proximity of the railroad to Glyndon allowed easy commuting for the businessmen to their jobs in the city some 25 miles away. Two- and three-story Victorian homes, with large airy rooms, wide halls from front to rear, and spacious porches, was the type of architecture chosen by the majority of the builders. Additionally, several boarding houses invited city folks to live in the country during the summer months.

A small business district grew up around the railroad station to service the needs of Glyndon’s growing population. Besides the station, along Railroad Avenue there were a post office, a general store, a town hall, a blacksmith shop, a livery, a wheelwright shop, and an ice cream parlor. Along nearby Chatsworth Avenue (originally Reisterstown Avenue) there were a general store, a bakery, a butchery, an ice house, a carpenter, and the town magistrate’s office. There was, however, no candlestick maker.

The Western Maryland Railway and a later streetcar line, the Pikesville, Reisterstown & Emory Grove Railway, also brought summer people to Emory Grove, a Methodist religious campground founded before Glyndon in 1868. Across Butler Road (what was then called Dover Road) to the south is Glyndon Park, established in 1887 as a temperance camp meeting ground, the first of its kind in the nation south of the Mason and Dixon's Line.

In 1878, the Glyndon United Methodist Church(then called the Glyndon Methodist Episcopal Church) was constructed on Dover Road. The original brown-shingled chapel was destroyed by fire in 1929 and the present stone structure was dedicated in 1931. In 1873 the cornerstone was laid for Sacred Heart Church, at the time the only Catholic church between Westminster and Baltimore. The handsome Gothic structure was built with marble from the nearby quarry at the foot of “Dark Hollow Hill” (the Hill now being part of Butler Road).

There were two schools in the immediate area. St. George’s Hall, located at the end of Central Avenue where Bond Avenue crosses the railroad tracks (506 Bond), was established by Prof. J. C. Kinear in 1876 as a private boarding school for boys. Unfortunately the building was razed by fire in 1896; it was replaced with the current structure.

The two-room Glyndon School on Butler Road was built in 1887 when the growing year-round population of Glyndon necessitated a public school. The school house was abandoned in 1930 after consolidation with Franklin Elementary School in Reisterstown. In 1932 it became the home of the Woman’s Club of Glyndon. The Club was originally established in 1898 by some ladies who were “summering” in Glyndon and who gathered on a regular basis on a neighbor’s porch to read together. They called themselves the Glyndon Porch Class. Today the Woman’s Club of Glyndon promotes literary and social activities as well as interest in local civic problems and in national and world affairs.

The Glyndon Volunteer Fire Department has been active since 1904. Over the years its members have worked hard to provide the most modern and effective fire protection possible for the residents of the Glyndon community and of the surrounding area. The Ladies Auxiliary, organized in 1953, helps with this mission by raising funds for the work of the Company.

Glyndon Community Association (GCA)
The exact date of the first community association meeting in Glyndon is not known, but by early 1945 several community leaders and residents decided to formalize the activities of their group. On February 28, 1945, the group wasv incorporated under the name of The Glyndon Corporation. According to the original corporate charter, the founding fathers of GCA were Thomas Kooken, Donald P. Bellows, Eugene H. Ryer, as the incorporators; Mr. Bellows, along with John O. Cockey, Rosemund E. Smith, and Ira L. Wales as the first members of the board of directors. Bellows was also the first resident agent.

The name of the community association was changed to the Glyndon Community Association in 1956. The Board of Directors approved the name change on April 23, 1956, and the membership approved the name change at the May 3 membership meeting. The formal change of name was registered with the charter division of the State of Maryland on July 27, 1956.

As stated in its bylaws, the purpose of the GCA is to promote and maintain a strong community spirit in Glyndon, to bring about improved conditions in all things that affect the community in general, and to promote other non-profit purposes.

Membership is open to all individuals 18 years or older who own or occupy residential real property in Glyndon. GCA also has an emeritus membership which is limited to past members of GCA who no longer qualify as a regular member and whose request for Esuch status has been approved by GCA. Membership dues are minimal and a family discount is available.

For the purposes of GCA, Glyndon is the area within a line that generally runs from Emory Grove, including Seven Farms at Worthington Valley, east to Butler Road, across Worthington Avenue, then south to the south side of St. Paul Avenue, out to Central Avenue, north along Central to 350 Central and then west to the railroad tracks and then north across Butler Road back to Emory Grove.

GCA holds its annual meeting, at which its officers and directors are elected, in February. GCA also holds quarterly membership meetings. The board is composed of a president, a first and second vice president, a secretary, a treasurer, six directors elected at large and the immediate past president of GCA. The term of office is one year for officers and two years for directors to ensure both participation from the entire neighborhood and the preservation of institutional memory.

GCA sponsors several events during the course of the year, all currently without charge to the public, even those outside of Glyndon proper. For many years there has been an Easter Egg Hunt. Currently, this is held the Saturday before Easter in Glyndon Station Park, preceded the night before by an egg-stuffing event held at a neighborhood home and attended exclusively by parents.

A long-standing tradition of GCA has been a parade on Independence Day. The parade commences at 10:00 am at the intersection of Albright and Central avenues and proceeds north to Chatsworth, turns left to Railroad Avenue, and then again to the starting point and the historic O’Meara lawn. There, the federal flag is affixed to the end of an extended fire-truck ladder, a prayer is said, and all join in the singing of the national anthem, followed by hot dogs, lemonade and cookies. The parade is in essence a bike parade with children and adults marching the route. The Glyndon Volunteer Fire Department leads the event with one of its trucks, accompanied on occasion by a historic vehicle or lawn tractor.

In autumn, there is a Halloween Party at the firehouse and, at Christmas, GCA lights a local tree and sings carols at its Christmas Tree Lighting and Festival of Carols Without Lessons.

Historic Glyndon, Inc.(HGI)
Historic Glyndon, Inc. was founded in 1972. It began as a committee under the aegis of the Glyndon Community Association and became a separate organization after the town’s centennial in 1971. This organization is responsible for having had Glyndon declared a historic district at three levels: national, state and county.

HGI’s mission is "to preserve and protect Glyndon’s cultural, social, economic and architectural history, as well as to conduct educational and beautification projects which enrich Glyndon’s historical heritage."

The organization consists of officers (president, 1st vice-president, 2nd vice-president, treasurer and secretary), nine additional board members, a number of committees and a general membership. Membership is open to anyone with an interest in Glyndon and its mission. The committees include Membership, Architectural Design & Review, Historic House Plaques' Welcome and Holiday Open House

Regular events of HGI include the annual spring meeting of the general membership, a spring clean-up around the train station and post office, a biennial fall Celebrate Glyndon! display, and the Holiday Open House in December. Other endeavors have included the publication of a history book about the village (Glyndon: The Story of a Victorian Village, 1990), a 125th anniversary weekend celebration in 1996, historic town markers, historic street signs, historic house plaques and a house and garden tour.

Places and points of interest

All content from Kiddle encyclopedia articles (including the article images and facts) can be freely used under Attribution-ShareAlike license, unless stated otherwise. Cite this article:
Glyndon, Maryland Facts for Kids. Kiddle Encyclopedia.