The Goodyear Airdock is a construction and storage airship hangar in Akron, Ohio. At its completion in 1929, it was the largest building in the world without interior supports.

The airdock is so large that temperature changes within the structure can be very different from that on the outside of the structure. To accommodate these fluctuations, which could cause structural damage, a row of 12 windows 100 feet (30.48 m) off the ground was installed. Furthermore, the entire structure is mounted on rollers to compensate for expansion or contraction resulting from temperature changes. When the humidity is high in the Airdock, a sudden change in temperature causes condensation. This condensation falls in a mist, creating the illusion of rain, according to the designer. 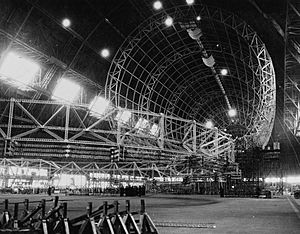 The U.S. Navy airship USS Macon under construction at the Goodyear Airdock in 1932.

In 1929, Goodyear Zeppelin Corporation, later Goodyear Aerospace, sought a structure in which "lighter-than-air" ships (later known as airships, dirigibles, and blimps) could be constructed. The company commissioned Karl Arnstein of Akron, Ohio, whose design was inspired by the blueprints of the first aerodynamic-shaped airship hangar, built in 1913 in Dresden, Germany.

When World War II broke out, enclosed production areas were desperately needed, and the airdock was used for building airships. The last airship built in the airdock was the U.S. Navy's ZPG-3W in 1960. The building later housed the photographic division of the Goodyear Aerospace Corporation. 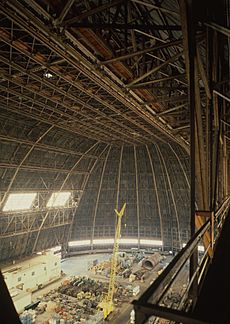 Interior of the Goodyear Airdock, May 1985

The airdock has more recently served as the site of the 1986 kickoff rally for the United Way of Summit County, where 200,000 members of the public visited. Bill Clinton spoke there during his 1992 election campaign, bringing some 30,000 visitors to the site.

All content from Kiddle encyclopedia articles (including the article images and facts) can be freely used under Attribution-ShareAlike license, unless stated otherwise. Cite this article:
Goodyear Airdock Facts for Kids. Kiddle Encyclopedia.