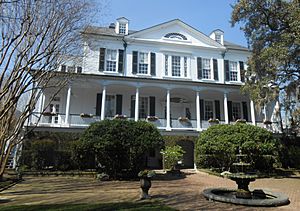 The woodwork around the main entrance and along the piazzas on the south side are notable.

The interior is notable for its Regency details. There is a cantilevered stair; the only other cantilevered staircase in Charleston is at the Nathaniel Russell House at 51 Meeting St. The house's floorplan is a basic double house.

All content from Kiddle encyclopedia articles (including the article images and facts) can be freely used under Attribution-ShareAlike license, unless stated otherwise. Cite this article:
Gov. Thomas Bennett House Facts for Kids. Kiddle Encyclopedia.