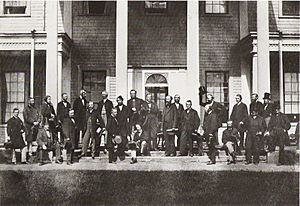 The Fathers of Confederation gathered on the steps of Government House for the Charlottetown Conference, 1864

Government House was constructed between 1832 and 1834 as a viceregal residence for the lieutenant governor of the then British colony of Prince Edward Island. The land, a parcel of 100 acres (0.40 km2) known as Fanning Bank or Fanning's Bank, was in 1789 set aside by Lieutenant Governor Edmund Fanning as Crown land, with the specific stipulation that it be used as the site for the governor's residence. In 1873, approximately 10 acres (40,000 m2) was retained for Government House and its grounds. 40 acres was given to the City of Charlottetown and later became Victoria Park.

Government House was designated a National Historic Site of Canada in 1971.

Government House is where members of the Canadian Royal Family and visiting foreign dignitaries are greeted and often stay while in Charlottetown. It is also where numerous royal and viceroyal events take place, such as the bestowing of provincial awards or inductions into the Order of Prince Edward Island, as well as luncheons, dinners, receptions, and speaking engagements. It is also at the royal residence that the lieutenant governor will drop the writs of election, swear-in new members of the Executive Council, and hold audience with her premier.

The property is owned by the Queen in Right of Prince Edward Island and is open to the public for certain periods during the summer.

The wood frame building's architectural design is Georgian with echoes of the Palladian tradition. The two axis of the house converge on the main entrance hall, which has doric columns and pilasters and a double switchback stair leading to the second floor. The residence was designed by Yorkshire architect Isaac Smith, who also designed the Island's Colonial Building.

All content from Kiddle encyclopedia articles (including the article images and facts) can be freely used under Attribution-ShareAlike license, unless stated otherwise. Cite this article:
Government House (Prince Edward Island) Facts for Kids. Kiddle Encyclopedia.