Kids Encyclopedia Facts
Not to be confused with Coast Guard Island. 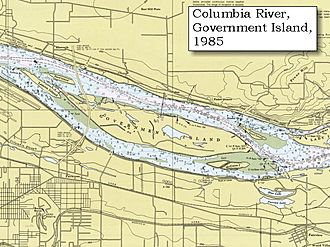 Government Island is a 1,760-acre (7 km2) island in the Columbia River north of Portland, in Multnomah County, in the U.S. state of Oregon. Though Interstate 205 passes over it on the Glenn L. Jackson Memorial Bridge, access to the island is only by boat. There is a city controlled locked gate in the 205 fence. Government Island is known for its great blue heron colony and the Government Island State Recreation Area (primitive camping, beaches). The interior of the island, off limits to the public, contains a seasonal cattle ranch and protected natural areas, including Jewit Lake. There are also remnants of old pioneer buildings on the island. Camping is permitted below the vegetation line around the perimeter, and picnic tables and restrooms can be found in these areas as well. Many threatened or endangered wildlife species live on the island, including red-legged frog, pileated woodpecker, little willow flycatcher, olive-sided flycatcher, western meadowlark, horned grebe, red-necked grebe, bufflehead, purple martin, and possibly the endangered Columbian white-tailed deer.

Government Island’s first documented visitors were British explorer Broughton in 1792 and American explorers Lewis and Clark in 1805, and acquired its current name after being appropriated by the U.S. military (to grow hay) in 1850.

Most of the island is owned by the Port of Portland. The Port acquired the entire island (as well as adjacent Lemon Island and McGuire Island) in 1969 in order to expand nearby Portland International Airport. Though those plans have been abandoned, the Port continues to control the land to prevent any uses incompatible with its location under the airport's primary flight path. In 1999 the Port sold 224 acres (0.9 km2) of the island to Metro, a regional government agency, and leased the remainder to the Oregon Parks and Recreation Department for 99 years.

All content from Kiddle encyclopedia articles (including the article images and facts) can be freely used under Attribution-ShareAlike license, unless stated otherwise. Cite this article:
Government Island (Oregon) Facts for Kids. Kiddle Encyclopedia.