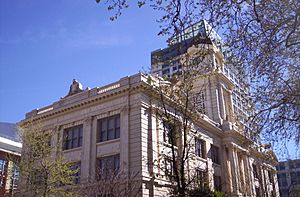 The Government of Sacramento operates as a charter city (as opposed to a general law city) under the Charter of the City of Sacramento. The elected government is composed of the Sacramento City Council with 8 city council districts and the Mayor of Sacramento, which operate under a manager-council government. In addition, there are numerous departments and appointed officers such as the City Manager, Sacramento Police Department (SPD), the Sacramento Fire Department (SFD), Community Development Department, City Clerk, City Attorney, and City Treasurer. As of June 7, 2021, the current mayor was Darrell Steinberg and the current councilors were Angelique Ashby, Sean Loloee, Jeff Harris, Katie Valenzuela, Jay Schenirer, Eric Guerra, Rick Jennings II, and Mai Vang.

The Mayor of Sacramento is the presiding officer of the city, and is elected for a four-year term. Under the California Constitution, all judicial, school, county, and city offices, including those of chartered cities, are nonpartisan. The 41st and current Mayor is Kevin Johnson.

The Sacramento City Council is the governing body of the City of Sacramento. The council is composed of eight members elected from single-member districts for four-year terms. The council members as of September 8, 2015 were:

The Sacramento Police Department (SPD) polices the city of Sacramento.

The Sacramento County Superior Court, which covers the entire county, is not a County department but a division of the State's trial court system. Historically, the courthouses were county-owned buildings that were maintained at county expense, which created significant friction since the trial court judges, as officials of the state government, had to lobby the county Board of Supervisors for facility renovations and upgrades. In turn, the state judiciary successfully persuaded the state Legislature to authorize the transfer of all courthouses to the state government in 2008 and 2009 (so that judges would have direct control over their own courthouses). Courthouse security is still provided by the county government under a contract with the state.

All content from Kiddle encyclopedia articles (including the article images and facts) can be freely used under Attribution-ShareAlike license, unless stated otherwise. Cite this article:
Government of Sacramento, California Facts for Kids. Kiddle Encyclopedia.