Grammia arge, the arge moth or arge tiger moth, is a moth of the family Erebidae. The species was first described by Dru Drury in 1773. It is found in North America from Quebec and Maine to Florida, West to New Mexico, North to North Dakota and Ontario.

The wingspan is 38–50 millimetres (1.5–2.0 in). Adults are on wing from April to September in most of the range and from July to September in Quebec. There are two generations per year in the south and one or two in the North. 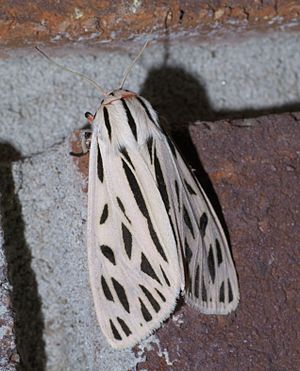 All content from Kiddle encyclopedia articles (including the article images and facts) can be freely used under Attribution-ShareAlike license, unless stated otherwise. Cite this article:
Grammia arge Facts for Kids. Kiddle Encyclopedia.