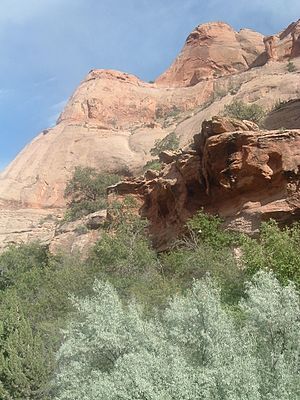 A typical scene in Grandstaff Canyon 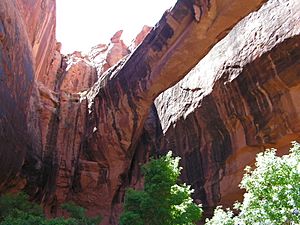 Morning Glory Arch, a natural arch located in the canyon 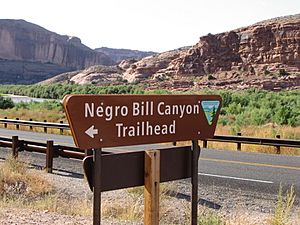 The canyon was named after William Grandstaff, a mixed-race cowboy, who prospected and ran cattle in the desert canyon in the late 1870s with a Canadian trapper named Frenchie. They took joint possession of the abandoned Elk Mountain Mission fort near Moab after 1877, and each controlled part of the Spanish Valley. Grandstaff fled the area in 1881 after being charged with bootlegging whiskey to the Indians.

Until the 1960s, the canyon was named Nigger Bill Canyon.

In the wake of the 2015 Charleston church shooting, local councilwoman Mary McGann called for the renaming of the canyon to the more formal Grandstaff Canyon. Although the local NAACP chapter was behind its renaming in the 1960s, they opposed the further change to Grandstaff Canyon. Jeanetta Williams, president of the Salt Lake City NAACP chapter, said the name wasn't offensive and wanted the local council to focus on different issues of discrimination instead. However, in 2017 the U.S. Board on Geographic Names voted to have it renamed to Grandstaff Canyon.

All content from Kiddle encyclopedia articles (including the article images and facts) can be freely used under Attribution-ShareAlike license, unless stated otherwise. Cite this article:
Grandstaff Canyon Facts for Kids. Kiddle Encyclopedia.