Grange stone circle (Lios na Gráinsí or Fort of the Grange) is a stone circle in County Limerick, Ireland. It is located 300m west of Lough Gur, 4 km north of Bruff. The Limerick-Kilmallock road is nearby. 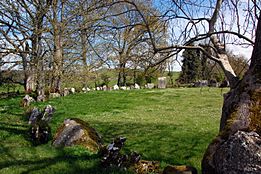 Grange Stone Circle is the largest stone circle in Ireland.

The stone circle comprises a continuous ring of 113 uprights up to 2.8m high, with a diameter of 45m and backed by an earthen bank 9m wide and about 1.2m tall. The entrance on the eastern side is paved and flanked by uprights. Clay has been packed down to a depth of 60 cm across the whole area of the enclosure. On excavation it was found to be littered with late Neolithic Beaker pottery, which seemed to have been deliberately smashed. Its near perfect shape and the discovery of a posthole in the very centre of the enclosure, indicates that the circle was measured out from a central stake with a rope. Twelve large orthostats have been placed at intervals around the stone ring, each standing directly opposite one of the other 'axial' stones. The stones are contiguous rather than free-standing, and the surrounding bank makes it look more like a form of henge monument than a conventional stone circle. This embankment and the precise arrangement of orthostats suggest that this site had a ritual purpose.

The largest stone is Rannach Chruim Duibh (Crom Dubh's Division) and is over 4m high and weighs 40 tonnes. The entrance of the circle is aligned with the rising sun at the Summer Solstice. The entrance stones are matched by a pair of equally impressive slabs on the southwest side, whose tops slope down towards each other to form a v-shape. During excavations no structures were found but two hearths; a few un-burnt human bones, some animal bones (mainly cattle), some bronze materials and numerous Neolithic pottery pieces were discovered.

A short distance to the north-north east of the main stone circle, is a second smaller circle, also constructed of large stones. To the north of this is a large leaning standing stone.

All content from Kiddle encyclopedia articles (including the article images and facts) can be freely used under Attribution-ShareAlike license, unless stated otherwise. Cite this article:
Grange stone circle Facts for Kids. Kiddle Encyclopedia.