Granuaile's Castle is located on the east coast of Clare Island.

Granuaile's Castle was built in the 16th century by the Ó Máille (O'Malley), Kings of Umaill. It was a stronghold of Gráinne Ní Mháille (Grace O'Malley, c. 1530 – c. 1603), the famous "pirate queen." Her other strongholds were at Rockfleet Castle (on Clew Bay) and Carrickkildavnet Castle.

In the 1820s the castle was converted into a police barracks, when the purple slate flashing was added to the two bartizans. 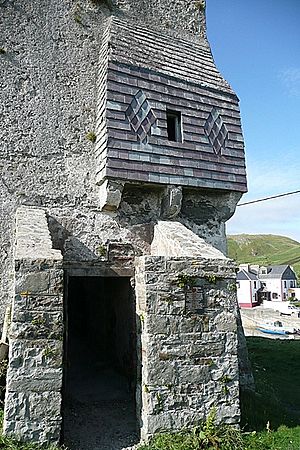 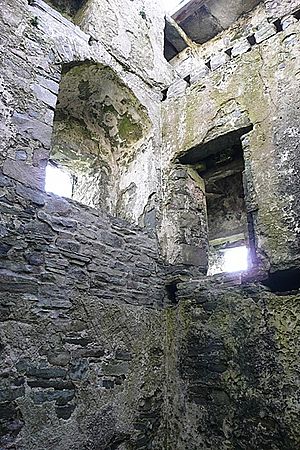 The main living room was at that first floor level with access to the bartizans and the garderobe.

All content from Kiddle encyclopedia articles (including the article images and facts) can be freely used under Attribution-ShareAlike license, unless stated otherwise. Cite this article:
Granuaile's Castle Facts for Kids. Kiddle Encyclopedia.