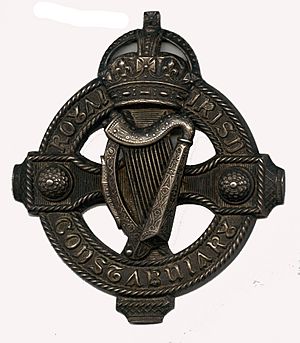 The Royal Irish Constabulary (Irish: Constáblacht Ríoga na hÉireann) was the police force of Ireland when it was part of the United Kingdom. It was made by legislation, which was sponsored by Sir Robert Peel in 1814. It was given its name by Queen Victoria for its loyalty during an Irish rebellion in 1867. It was made up mainly of Irish Roman Catholics. In 1870 the RIC took over the police forces of Londonderry and Belfast. The RIC worked together with the Dublin Metropolitan Police.

It was shut down when Ireland left the UK in 1922. The Irish Free State Civic Guard has taken its place in Ireland, and in Northern Ireland it was replaced by the Royal Ulster Constabulary.

All content from Kiddle encyclopedia articles (including the article images and facts) can be freely used under Attribution-ShareAlike license, unless stated otherwise. Cite this article:
Royal Irish Constabulary Facts for Kids. Kiddle Encyclopedia.