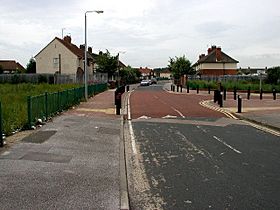 Greatfield Estate is a housing estate in the east of Kingston upon Hull built in the late 1950s.

Greatfield estate is located in the far south-east of Kingston upon Hull, close to the eastern boundary of the city, formed by the Old Fleet Drain. To the south it is bounded by the former Hull and Holderness Railway (now a cycle track), beyond which is a portside industrial area, and the King George Dock; to the west is Craven Park rugby ground, and the Preston Road Estate beyond; to the north-west is the Bilton Grange estate; and to the east is open farmland in the East Riding of Yorkshire – Preston is around 4 miles (6.4 km) to the east. The estate is lowlying, under 5 metres (16 ft) above sea level. Annandale Road is the main road of the estate which bends, coming from the north-west and exiting to the west, connecting with Preston Road.

In 2007 the area was classed as an economically deprived area, with many residents in lower socioeconomic classes – people in the estate are predominately white British ethnically, with 93.1% classed as white.

Before the construction of the estate the land at 'Greatfield' was undeveloped -in 1850 it was enclosed drained fields with no roads – this situation continued until the estate's construction. The Hull and Holderness Railway which later bounded the estate to the south was constructed in the early 1850s. The Preston Road estate immediately to the west was under development by the 1930s, and the nearby Eastern Cemetery came into use in 1931.

In the reconstruction period after the Second World War the Hull Corporation created several new housing estates in east Hull – these were Bilton Grange, Longhill and the Greatfield Estate. All were designed by Andrew Rankine, Hull's city architect as independent units, each with its own shops, schools, libraries and other civic facilities. Their design was in a reduced Festival of Britain style, with pantile roofed brick buildings, built along generally short curving roads with generous common open treed areas. Greatfield estate consisted of 823 houses.

Greatfield estate was completed in 1960. The church of St Hilda was opened 1960, a subsidiary of the parish of Marfleet. Other facilities around the estate in 1961 were the Oldfleet and Stockwell County Primary Schools, and the Goat and Compasses public house. A dedicated library for the estate was opened in 1963. The Roman Catholic St Stephen's church opened 1966.

Greatfield High School was established in 1957 on a tripartite educational system – it consisted of three halls: Newton Hall, a Grammar school (600 places); Elizabethan Hall, a secondary modern (450 places); and Shakespeare Hall, a Technical school (450 places). In 1969 Newton and Elizabethan Hall merged into a High school, whilst Shakespeare became a primary. The school closed in 1988. The three sub-schools were located adjacent west of Greatfield, and east of Poorhouse Lane, on adjacent sites. The Craven Park rugby ground was built to the east of the schools in the 1980s.

Initially designed to create a near classless social structure, with a village or small town social structure the estate suffered through lack of employment in the later 20th century, though the estate is said to have retained a strong community spirit.

In 2014 construction began of a new special alternative provision academy school, "Aspire Academy", on the site of the Isaac Newton school. The school opened 2015.

In 2015 local events were organised to celebrate 60 years of the estate's existence.

All content from Kiddle encyclopedia articles (including the article images and facts) can be freely used under Attribution-ShareAlike license, unless stated otherwise. Cite this article:
Greatfield Estate, Kingston upon Hull Facts for Kids. Kiddle Encyclopedia.