Preston is a village and civil parish in the East Riding of Yorkshire, England, in an area known as Holderness. It is situated approximately 6 miles (9.7 km) east of Hull city centre it lies just north of the A1033 road on the crossroads between the B1240 and B1362 roads.

The civil parish is formed by the village of Preston and the hamlet of Salt End. 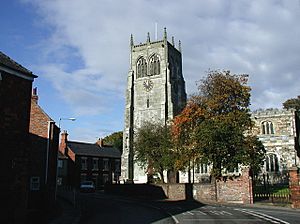 The parish church of All Saints is a Grade I listed building.

There is both a primary school (Preston Primary School) and a secondary school, which achieved Technology College status almost a decade ago, and has a sixth form facility joined onto the school, in Preston. South Holderness Technology College serves the surrounding villages of Paull, Hedon, Bilton, Skirlaugh, Keyingham, Thorngumbald, Aldbrough, West Newton, Burton Constable, Sproatley and others.

Preston has two pubs, a pizza takeaway, a Chinese takeaway and a garden centre, with a farm shop. There is also a butcher's shop on the main street, along with the Post Office. It also has a hairdressers and a traditional barbers shop.

Recently 'Preston (South)' was marked clearly by the Council, however the two are not geographically all that close, and still stand as two separate areas separated in places by Hedon.

All content from Kiddle encyclopedia articles (including the article images and facts) can be freely used under Attribution-ShareAlike license, unless stated otherwise. Cite this article:
Preston, East Riding of Yorkshire Facts for Kids. Kiddle Encyclopedia.