Hedon is a small town and civil parish in Holderness in the East Riding of Yorkshire, England. It is situated approximately 5 miles (8 km) east of Hull city centre. It lies to the north of the A1033 road at the crossroads of the B1240 and B1362 roads. It is particularly noted for the parish church of St. Augustine, known as the 'King of Holderness', which is a Grade I listed building.

Hedon is not mentioned in the Domesday Book which leads to the belief that it was a new town created by the Normans as a port. Hedon was at its most prosperous in the 12th and 13th centuries and at one time was the 11th largest port in England. The decline of the port came with the development of the port of Hull and the building of larger ships which were unable to get up the small river to Hedon.

Hedon was given its first charter by Henry II in 1158 and was granted improved ones by King John in 1200 and Henry III in 1248 and 1272. Edward III granted the most important charter which gave the town the right to elect a mayor. 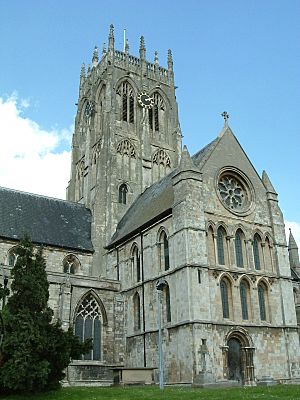 In 1415 Hedon was granted an important charter, which let the town have burgesses and other ministers and also gave the town a mace. This mace is now the oldest surviving mace in the country.

The town was a parliamentary borough until it was disenfranchised under the Reform Act 1832. It still enjoyed its borough status granted by its charters until 1974 when it was removed in a reorganisation of local government.

To the west of the town, there used to be a racecourse. After popularity waned, it was developed into an aerodrome and officially opened in 1929 by Prince George, Duke of Kent. The aerodrome was best known for being the arrival point for Hull-born aviator Amy Johnson on her triumphant homecoming following the record-breaking solo flight to Australia in 1930. After ten years of operation, the aerodrome closed following the outbreak of the Second World War in 1939. Following the end of the war in 1945, the site was briefly used as a motorcycle speedway track, before attempts were made in the late-1950s to reopen it for flying. Ultimately these attempts failed and the land has been used as grazing for cattle thereafter.

The Hull and Holderness Railway opened in 1854 which ran from Victoria Dock in Hull to Withernsea going through Hedon. The station was built to the north of the town and it proved a vital part of Hedon's transport system for a century. In 1965 Hedon lost its passenger service when British Railways appointed Lord Beeching to stop losses, and closed branch lines that weren't making a profit. The line from Hull as far as Hedon station remained open for Goods traffic until 1968.

Hedon became the subject of national media attention in August 2000 when a freak mini-tornado in the Humber Estuary caused flash floods and even hailstones to drop on parts of the town.

Hedon was also affected by the widespread floods that occurred in the UK in the summer of 2007. The areas of Hedon affected included the Inmans Estate and most areas near the Burstwick drain. The nearby village of Burstwick was the worst affected place in the East Riding of Yorkshire.

There have recently been plans to create a country park around the Hedon Haven to the south of the town.

The English potter, Dorothy Marion Campbell was born here. Sir Alexander Campbell, PC, KCMG, QC (9 March 1822 – 24 May 1892) was also born here; he was a Canadian statesman and politician, and a father of Canadian Confederation. Mezzo-soprano singer Amy Black (1973–2009) was born and educated in Hedon and is now buried in the cemetery.

All content from Kiddle encyclopedia articles (including the article images and facts) can be freely used under Attribution-ShareAlike license, unless stated otherwise. Cite this article:
Hedon Facts for Kids. Kiddle Encyclopedia.