Withernsea is a seaside resort town and civil parish in the East Riding of Yorkshire, England, and forms the focal point for a wider community of small villages in Holderness. Its most famous landmark is the white inland lighthouse, rising around 127 feet (39 m) above Hull Road. The lighthouse – no longer active – now houses a museum to 1950s actress Kay Kendall, who was born in the town.

The Prime Meridian crosses the coast to the north-west of Withernsea. 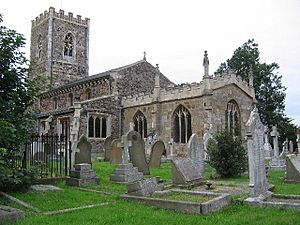 Like many seaside resorts, Withernsea has a wide promenade which reaches north and south from Pier Towers, the historic entrance to the pier, built in 1877 at a cost of £12,000. The pier was originally 399 yards (365 metres) long, but was gradually reduced in length through several impacts by local ships, starting with the Saffron in 1880 before the collision by an unnamed ship in 1888, again by a Grimsby fishing boat and again by the Henry Parr in 1893, leaving the once grand pier with a mere 50 feet (15 metres) of damaged wood and steel, which was removed in 1903. The Pier Towers have been refurbished.

During the mid-19th century the Hull and Holderness Railway was constructed, connecting the nearby city of Hull with Withernsea (via Keyingham and Patrington) and making possible cheap and convenient holidays for Victorian workers and their families, as well as boosting Withernsea's economy. It closed in 1964 and all that remains of it is an overgrown footpath where the track used to be.

Withernsea, like many British resorts, has suffered from a decline in the number of visiting holidaymakers. 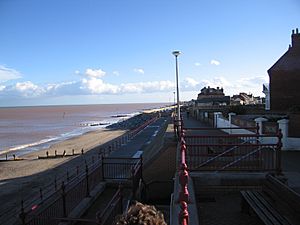 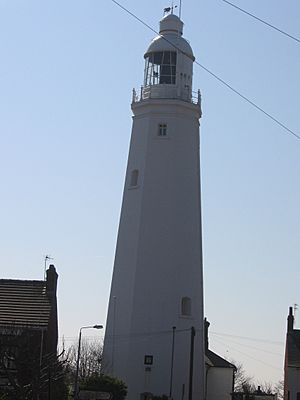 Some of the town's better-known tourist attractions and landmarks include:

The current Mayor of Withernsea is Cllr. Matthew Lloyd who has been Mayor since May 2016 and his current term ends in May 2017. The Deputy Mayor is Cllr. Terry Dagnell.

A by-election for the North ward was called following the resignation of Terry Render.

The following was elected for the North Ward: Callum Hollingworth.

A by-election was called for the South Ward following the resignation of Stuart Woodruff.

The following was elected in the South Ward by-election: Fiona Edgington.

A by-election was called for the South Ward following the resignation of Michael Kevan Hough.

The following was elected for the South Ward: Matthew Lloyd.

The following was elected for the North Ward: Dave Edwards.

The following was elected for the South Ward: John Michael Tasker.

The full council elections due to be held on 7 May were unconstested.

A by-election for the North Ward was called following the resignation of Pete Barker.

Patrick Wilkinson was duly elected. Note when he was elected he was the youngest Councillor in the UK aged just 18 years and 43 days old.

A by-election was called following the resignation of Gary Chambers

A by election was called following the resignation of Patrick Spicer

A by-election was called following the resignation of Silvia LaFleur and Darren England.

Following an unsuccessful attempt to purchase the Proudfoot Supermarket, Tesco opened a competing store which originally struggled to attract sales. Tesco resorted to a campaign of price flexing, offering customers £8 off for every £20 spent in their Withernsea branch. This led to an investigation by the Competition Commission. After their market share increased, Tesco prices returned to a level closer to the national average. Subsequently, Aldi took over the former Proudfoot supermarket, and are now offering very competitive opposition to Tesco. Meanwhile, the Withernsea Town Council has bought a former pub and nightclub, centrally located opposite Aldi, and has renamed it the Meridian Centre. A lottery bid for over £400,000 - Reaching Communities building fund - has been successful, and the building is now being refurbished to provide a community centre, including a cinema and performing arts venue.

There is a 9-hole golf course and leisure centre complex (with a gym and indoor pool) and a variety of pubs and restaurants are situated around the centre of the town.

There are a number of primary schools located in Withernsea which serve the surrounding area. Withernsea High School is the main secondary provider and has a technology college. The high school was refurbished in 2015.

All content from Kiddle encyclopedia articles (including the article images and facts) can be freely used under Attribution-ShareAlike license, unless stated otherwise. Cite this article:
Withernsea Facts for Kids. Kiddle Encyclopedia.